The births of twins are rising, thanks to assisted procreation, and more and more couples face this experience that will surely captivates but a
bit scares.
With so much serenity and common sense, the author reassures the next bi-mothers, fear is normal, but they have to react, have confidence in their abilities and accept the help offered by family and friends.
They can breastfeed and it is not necessary to give up going out or going on holiday, because organization and the right spirit are sufficient.
The book provides a series of useful information and practical advice not to get lost in the myriad of questions and concerns that women have normally during and after a twin pregnancy.

Obesity, metabolic disease, heart disease and dyslipidemia are increasing.
The cause is, in a very high percentage, an incorrect food, whose origin is to be found in childhood.
Unbalanced diets, errors in the evaluation of the actual state of child well-bein, excessive use of pre-packaged food and lack of consideration of the importance of a good nutritional balance for the overall health, are often at the root of serious problems that emerge in the distance. And is possible to prevent all this? It is still possible to wean and nurture children in a natural way, using fresh produce, following closely the physiology of growth and respecting the unique needs of each individual.
The author exposes both the scientific reasons of its protocol food, both its pattern of weaning, developed through years of study and observation in the field.

I wanted to become a father 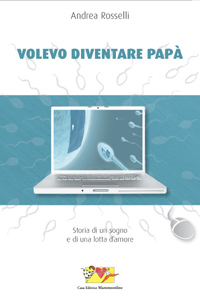 infertility as seen from a lesser known - or male - point of view.  I wanted to become a father is an autobiographical voyage to a hidden world which is usually only described by women. It is an aspiring father’s life story offered to anyone who wants to learn more about the infinite behind-the-scenes psychological, physical, medical, social and legislative realities that are hidden in a social drama like infertility.

This story is different from the others because it is written by a man. However in his preface the writer is careful to clarify to readers that ‘I have no intention of comparing the pain of infertility between men and women:  while it is true that this is a couple’s problem which is experienced and consumed as a couple, it is also true that neither solidarity nor the deepest understanding can help a man to understand the terrible suffering a woman goes through when she is unable to experience the joy of maternity yet wishes for nothing else. Our, (or, more humbly, my) point of view is simply a different one coming from another angle, a different way of experiencing what is in any case a torture of immeasurable proportions”.

It is also a book which denounces the shameful legislative situation which Italian couples with infertility problems must deal with. It is a situation generated and maintained by a lethal mix of the political establishment’s negligence and the Church’s interference, topped off by considerable indifference on the part of the general public. 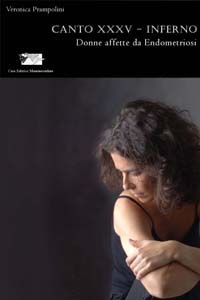 “I would like for anyone who came upon this book in a bookstore to read at least the word endometriosis.  It does not matter if this person puts it right back and walks away.  I want this word to slowly become more and more part of the socially known diseases.  It is for this reason that I would like for this word to appear in the title, even though, romantically, I could think of more attractive titles…”.  With these words in the pages of her book Veronica Prampolini explains her desire to share, provide and receive accurate information, as well as to help many other women, a desire which has prompted her to talk about her experience with endometriosis through a book.

It is estimated that there are 150 million women worldwide who are affected by endometriosis, 14 millions of which in Europe alone.  However, despite these figures, endometriosis remains a silent and unfamiliar disease whose causes are still unknown.  It is a disease to which very little research is devoted, which is often not even acknowledged as an actual illness and which, unfortunately, in 60% of the cases is very painful to the point of becoming almost a disability. But most of all endometriosis is a huge obstacle for those women who want to become pregnant, even though, paradoxically, pregnancy, should they ever succeed in achieving it, is ideal to decrease the symptoms of the disease.

In her book Veronica Prampolini talks about her battle with endometriosis, the surgeries she endured, the difficulties encountered while trying to get her disease acknowledged, the impact of the disease on her marriage, as well as on her social and work life, her desire to have a baby despite her illness and her journey to motherhood through ART (Assisted Reproductive Technology).

This book   also intends to denounce the law that in Italy imposes absurd limits on Assisted Reproductive Technology and that forces many couples who experience infertility to undergo treatments with a lower potential for success, which, in turn, leads them to seek care abroad.

Why this subtitle?  Veronica writes: “If Dante was alive, I would ask him to add another chapter to his Divine Comedy within the Inferno, the XXXV one." 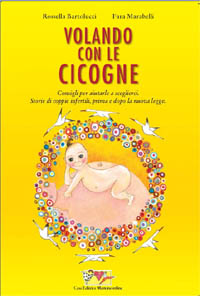 Stories of women who tell how they lived infertility and the path of ART.

Thanks to the experience of the forum of community online Mammeonline.net who knows how much is important to face with other women who have the same problem.
“The net helped me to catch strenght, confidence, hope and a lot of friends” said our little stork.
We wont give this also to women who don’t use Internet with a book.